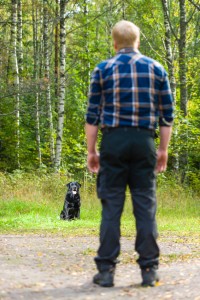 Like every new skill we teach a dog, it helps to break the ‘back cast’ down into simple stages.

Ultimately of course, we will want the dog to cast back from any position, in any location, over any kind of obstacle, for blind as well as seen retrieves,  and to do so under any amount of distraction.

But these are factors of difficulty and we need to build up to them gradually.

Below are my steps for establishing the basic back cast.[wp_ad_camp_1]This is not the only way to introduce the back cast, nor the only type of exercise you can use to practice back casts (we’ll be looking at others later).

However,  it is a simple, clear progression that will help beginners to get this important concept firmly established in their dog’s mind.

And I hope you find it useful.

There is an exercise for each of these six steps. I’ll give you a brief summary here, and publish the exercises separately.

All these exercises take place in the same location, the same field or piece of ground, and with the dog in the same part of that field.  Don’t try and do this until you know you have access to the same bit of ground for several days in a row.

Later on, when these basics are established we’ll rehearse these skills in lots of different locations and under increasingly challenging conditions. But for now, you need to be able to train in the same place, every day, for several days.

Train on a fairly even surface, short grass or bare ground is fine.  The dog needs to be able to see the dummy clearly as soon as he rotates away from you.

We don’t want him bumbling about hunting all over the place.  This is a spin, grab and return scenario!

Initially we want the dog sitting facing the same direction at the start of each and every cast.  So when you go out on Thursday, don’t forget where you were stood on Wednesday!

We also want the dog to learn to focus on his teamwork and on following instructions.  So the second exercise  makes it clear that the dog has to act on our choice of retrieve, rather than the easiest or most attractive option (which is usually the last thrown or most visible dummy).

This involves teaching the dog to carry out his cast even after he has seen a dummy thrown elsewhere.  It is a back cast with a distraction.  And it adds a new level of difficulty for the dog so we build the distraction in stages.  I’ll explain exactly how in the exercise instructions

By the end of the second exercise, your dog will be casting back, despite having seen a tempting dummy thrown out to his right or his left.

But that is not all we require.  A dog that will only cast to the North is no good to us!

We also need to dog to cast back when he is facing in different direction.  South, East, West or indeed any other point of the compass.   This is laughably obvious to us as humans.

But the fact  that the back cast applies in different directions is not always obvious to a dog.  My younger Labrador Rachael had no problem with this at all, but it is a common stumbling block for many dogs initially, including for my older lab Tess.

As always, when you first add a new concept, such as a different direction, it is a good idea to make the exercise more simple in every other way possible.  This ‘sets the dog up to win’

The fifth exercise adds yet another challenge.  Your dog may well be assuming that the back cast is an action whose direction is determined by the his position relative to the fall of the dummy.  Or he may be assuming that he will simply be retrieving the first thrown of two dummies.

Neither of these is what determines a back cast.  A back cast simply tells the dog to run in the direction that the handler is facing.  And we need this to be crystal clear.

We now ask the dog to cast ‘back’ to a dummy that was in a different position relative to ‘him’ when he marked the fall.

What you are doing here is making it absolutely clear to the dog, that the back cast is a direction determined only by the relative position between the two of you.

It is not about remembering where dummies have fallen, it isn’t even about marking (though we use marks to get it started) it is about rotating his body through 180 degrees and travelling in a straight line, in the direction that his handler is facing.

The final step in this basic casting programme adds a distraction to this position shifting exercise.

By the time you complete it, your dog should be pretty clear in his mind what the back cast actually means.

He will need to cast into cover, over water, fences, and ditches.  And anywhere else where  we might expect to find a retrieve.  But that is a separate story.

For now, if you are new to casting, you need a programme to teach your dog the real meaning of the back cast.

You need some clear steps to create an automatic and unquestioning response to your back cast, and in doing so build the foundations on which future training can be supported.

These six steps will help you achieve this.  I am going to publish training exercises to help you with this over the next  few days.  Work through them in order, don’t skip any.  And have fun!

Don’t forget, if you don’t want to miss any of this series, just sign up for my email updates.  It’s free!