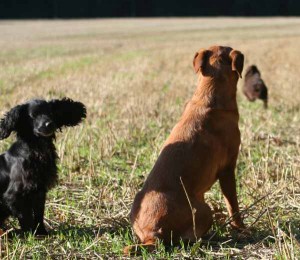 After a few days of rain and storms,  today was perfect.

I took the dogs out training on the stubble in the early morning sun.

This week I am focusing on sharpening up the stop whistle.

We are also doing long go-back retrieves to increase their stamina.

When I refresh the stop whistle,  I take each dog back through all the stages of stop whistle training. This makes sure that the stop is nice and sharp at each stage,  before moving on to more ‘testing’  situations.

But only by a fraction.

Phoebe is still young and in training, so I moved on to something more complicated with Tess and Meg.

We went on to dropping whilst hunting in the stubble using a technique called The Stolen Retrieve.

The best way to practice the stolen retrieve, is with a helper who throws the dummy. They then steal it back, whilst you turn your dog the other way.

You then send the dog for the missing dummy and whilst she is hunting the area of fall,  you blow the stop whistle.

As soon as the dog sits you throw another dummy,  as a reward.  Obviously you can only do this with dogs that are steady to fall.

I do this without a helper,  by walking away from the dog,  throwing out the dummy,  then picking it up again and returning to the dog.

Now you would think that the dog having seen me pick up the dummy, would put two and two together and realise it is no longer there.   However, I have discovered over the years,  that most dogs do not apply human logic to this situation.

They saw the dummy thrown,  and off they go to find it.   They don’t seem to be able to deduce that it is no longer there, from the fact that they saw you pick it up.    Bless!

Both dogs were nice and sharp on this  exercise and I will move on to some more challenging stops tomorrow.

After our stop whistle practice we did lots of go-back retrieves where the dogs took turns to fetch dummies I had dropped and left behind us as we walked around the field.

I thought you might like Phoebe’s ears in the picture above, as Meg shoots past the other two dogs for her turn at a retrieve.  Meg does everything at the speed of light.

Poor Tess and Phoebe were obviously relaxing and enjoying the sunshine when my little dynamo flew past, and she really startled them.

This article was previously published in Pippa’s Blog, in September 2011