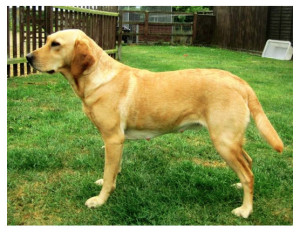 Exercise Induced Collapse is an unpleasant disease that strikes down young and apparently healthy gundogs.

Often in the prime of their lives, or at the peak of their working or competitive careers.

Though the disease is more prevalent amongst retrievers (especially Labradors), it is also found in some spaniels and pointers.

Dogs which have this disease typically become weak and collapse, after a short period (5 to 20 minutes) of high intensity exercise, especially if accompanied by a great deal of excitement.

Pet dogs are just as susceptible to the disease as working dogs, but it may go undetected if they do not participate in any intensive activity. Most dogs do recover quite quickly from each episode, though a few affected dogs have tragically died.

But for a working or competitive (field trial) dog the disease spells the end of its career, and a lifetime of careful and possibly very restricted exercise. This is devastating news to the owner that will have put hundreds of hours of work in to training the dog.

I first heard of this strange phenomenon of ‘collapsing labradors’, through chatting to retriever owners in the USA, some years ago.[wp_ad_camp_1]At the time there was considerable confusion and disagreement as to whether the disease was inherited, or even existed at all.

In the UK, the condition was largely unknown.

Most of us in the shooting community had seen or heard of, the occasional working spaniel collapsing in the ‘beating line’ in the UK.

However this latter condition, where the dog typically collapses after several hours of exercise is likely to be linked to low blood sugar levels and general exhaustion, whereas EIC affected dogs collapse soon after the onset of exercise, and their collapse is characterised by profound weakness in the hindquarters.

Scientists at the University of Minnesota examined hundreds of dogs showing these characteristic EIC symptoms and the results of their experiments identifying the faulty DNM1 gene as the culprit, were published quite recently in 2008.

So is this just an American problem?

EIC is not just an American problem. It has now been identified in retrievers here in the UK, and other European countries, and whilst those of us in the working dog community may have not yet come across this condition, plenty of dogs carrying the disease have been identified by those that are forward thinking enough to take advantage of the genetic test now available.

EIC is an autosomal recessive disease. What this means is, that in order for the dog to be affected by this disease, it needs to have inherited two copies of the EIC gene, one from each of its parents.

If it has the EIC gene from only one parent, the dog will not get the disease, but, it could pass that copy of the affected gene on to some of its progeny. It is in effect a carrier.

If the dog does not inherit the EIC gene from either parent, it will never get the disease, and it will not carry the disease either.

The beauty of the genetic test for this condition (and other conditions that are inherited in this way) is that it enables us to breed from carriers, because provided that the carrier is mated to a ‘clear’ dog, none of its progeny will ever develop the disease.

Why breed from carriers at all?

And an ability to breed from carriers is crucial because it helps us maintain diversity within a breed. The field trial community is a fairly small gene pool, and a relatively small number of stud dogs tend to be ‘fashionable’ sires at any one time.

The number of health tests available for Labradors is increasing steadily. If we eliminate all carriers of known diseases as potential parents, we are effectively slashing the gene pool even further, and the smaller the gene pool, the greater the risk of other diseases rearing their ugly heads.

Yet to knowingly breed from an EIC carrier requires that the breeder finds a mate who is clear of the disease. This will mean that the most copies of the EIC gene any puppy from the mating can inherit is one, and as two copies are required to cause the disease, none of the puppies will suffer from the condition.

But finding the right mate for a carrier, requires that the potential mate is also tested, and at the time of writing, testing for EIC is not a common occurrence in the working dog community, as Jill Parsons from Ettinsmoor Gundogs discovered recently.

Jill is one of the few gundog breeders to have tested a potential breeding bitch for EIC in the UK. She bred Spice herself, bringing some ‘show’ blood in to her working stock to tweak the conformation of her dogs.

Finding a mate for Spice

As you can see from the photo above, Spice is certainly a lovely looking bitch. She had also proven herself a success at work and in competition. But on hearing that a dog related to Spice had ‘problems’ Jill took the responsible decision to get Spice tested for EIC.

The news that Spice was a carrier meant that Jill could only have her mated if she could find a suitable stud dog that had been tested for the disease and was clear of EIC. This proved to be a difficult task as Jill describes

“so very few working labs are tested. I found two, but to be honest they were not entirely what I was looking for working wise and I was having a few sleepless nights trying to get my head around what to do next”

Jill eventually decided that the solution was to approach the owner of the stud dog she really liked and to offer to pay for him to be tested herself. As Jill points out, this is a risk for the owner of a popular stud dog, but fortunately she agreed to let her dog take the test.

Happily he turned out to be clear and the lovely Spice gave birth to a litter of puppies that can never develop EIC.

Very few working labradors are currently tested for EIC in the UK. If we are to protect the diversity in our Labrador gene pool and enable owners of carriers to find a suitable mate, we need more dogs to be tested.

Most importantly, we are in a great position now to be pro-active and stop the spread of this disease in the British working dog community, before it has a chance to get established. This is a unique opportunity but the only way this test will become widely used is if we in the gundog community support and promote it.

If you are a gundog breeder, own a stud dog, or are thinking of having a litter from your bitch, you can get all the information you need to get your dog tested, from the University of Minnesota in the USA.

Those of you in the market for a puppy can encourage the uptake of the EIC test by asking breeders if their stock is tested before you visit or book a puppy.

Remember it does not matter if one parent is a ‘carrier’ provided that the other is ‘clear’. One copy of the EIC gene will not harm your puppy.