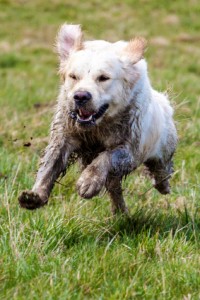 This is the third part of the training permanent blinds mini series.

In Part Two we established some permanent blinds, and lengthened them out a little.

We also introduced your gundog to several permanent blinds in new and different locations.

In this article, we are going to look at teaching the dog that he needs to respond appropriately to this ‘back’ command, even when there are enticing alternatives.

The following is an excerpt from Passing Grade Three

Now that your dog is now confidently running out to several permanent blinds without any hesitation, we can move on to Exercise Four.[wp_ad_camp_1]This exercise is designed to make sure that the dog understands the ‘back’ command even more clearly.

We want him to know that he must run back blind, in any location you choose, on your command, even if he can clearly see a retrieve in another direction.

You will be using the familiar permanent blind locations at which you have already trained, but because you are adding a new factor of difficulty (a distraction dummy) you will make the retrieves much shorter again to begin with.

If the dog is clearly finding the distraction very tempting, repeat steps 1 to 8 at each of your other permanent blind locations.  Repeat each session until the dog is competent.

If the dog is successfully running to the blind and is clearly not being tempted by the distraction, you will move on to your next blind and make it a little harder.

In the next exercise you will put out your distraction dummy as you did in Exercise Four, but you will send the dog without heeling him forwards first.

Make sure you do this gradually.  Don’t try to progress through all the next stages in one session.  If at any stage the dog is too tempted and fails to ‘line’ back without hesitation,  back up a stage and make things easier for him.

The dog has already run a similar exercise to the next one when you practiced three handed casting to marks.  But this is harder for him because the dummy you want him to collect is a blind (albeit a very predictable one), rather than one he has not seen fall.

For the first couple of times, remember to heel the dog forwards a few steps before sending him.  Make sure he is focused ahead before you give the ‘back’ command.

When you can answer yes to the following question, you can move on to True Blinds.

Q1. Does your dog run out confidently and without hesitation to any of the three permanent blind locations, after distraction dummies have been thrown to either side?

Passing Grade Three is available from the Gundog Club bookshop