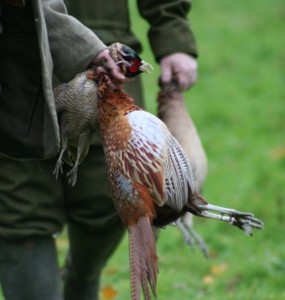 I am passionate about our responsibility to preserve our way of life for future generations.

I believe that game is an excellent and ethical source of meat and I want to help to ensure that ‘hunted’ meat will be available for our children and our children’s children to enjoy and benefit from.

Hunting in all its forms is now gravely threatened.

The importance of rural traditions and cultures in the UK go unrecognised despite our enthusiasm for protecting such traditions in more remote communities elsewhere.

Please Note! ‘A sporting chance?’ was written back in October 2011, and originally published on my blog ‘Tales from the Ratcatcher’s Wife’   I hope it goes some small way to explain why people hunt,  and eat hunted meat.  And why their right to do so, should be protected.

I had a great day picking up on our  pheasant shoot recently and yesterday had a look at the interesting debate developing on the retrieverman’s website,  about the ethics of shooting pen raised birds.[wp_ad_camp_1]It  has led me to thinking about the readers who struggle to understand why people can get involved in killing wild animals in general,  and pen raised birds in particular.

This article is not about the ethics of eating meat,  of killing another animal in order to consume it.

I have no problem with those that prefer to avoid eating meat.  I understand where they are coming from.

However, whilst we all know a vegetarian or two,  the majority of people in the western world are still meat-eaters.  And many meat eaters find certain kinds of hunting,   acceptable whilst disapproving of others.

A key argument against some forms of game shooting seem to revolve around the concept of what is or is not ‘fair’  towards the quarry species.  Hunters often talk about a ‘sporting shot’  or a ‘sporting chance’

Is hunting more acceptable or more appropriate if the animal is given a sporting chance?   Many people seem to think so.  The romantic notion of a hunter battling alone against the elements in order to track down and kill his quarry sits more comfortably with many of us than the idea of releasing caged birds from a tower to be shot by guns waiting below.

Actually, I am not sure that the concept of ‘fairness’  is a supportable argument in favour of any particular kinds of hunting.   After all,  except in most extreme climate or terrain,  man has all the advantages in any kind of a hunt.    What we perceive as fair   –  one man stalking a truly wild animal in its own environment for example –  is not actually fair at all.  The deer in your sights does not have a high powered rifle.   The truly wild pheasant has little chance against an ounce of lead pellets.

For many of us,  the concept of ‘fairness’  or giving animals a ‘sporting chance’  is highly associated with the enjoyment derived from the hunt.  If it is more ‘sporting’  then the hunter derives more of a sense of satisfaction and achievement.   What each individual considers to be  ‘sporting’ is often a matter of personal taste, or cultural norms.  In the UK for example the concept of ‘tower shooting’ or ‘ramp shooting’  (which we do not have here)  is considered very unsporting.

But surely from the quarry’s point of view, and with regard to the ethics of the process involved in acquiring it, it  is the manner of its life and death that really matters.   It is a welfare issue.   We understand this well enough in farming.  Being farmed for meat is hardly ‘fair’  or sporting.  The animals we are most comfortable eating are usually those that have had a decent life and a humane death.

But ethical reasons for participating in hunting have to be based on more than giving animals a ‘sporting chance’.  I see ‘game’  as a food source.  I enjoy hunting,  but to me that is a happy coincidence,  a by product if you like,  of an excellent source of meat.

There are two sources of meat available to us.   Wild,  or farmed.   There are often welfare issues in modern farming (overcrowding, stressful husbandry practices, over-medication etc) that for many people make farmed meat a less ethical product than hunted meat.

One way around those welfare issues is for people to farm or raise their own meat in conditions that they have control over.  Many of the welfare issues in farming are related to mass-production at low prices.    Unfortunately, for most people,  keeping a cow and a few pigs and chickens, is simply not an option.

The fact that game is such an excellent food source,  and that game animals have not been subjected to a lifetime of battery cages, and an ignominious end in the abattoir,  makes it an ethically supportable source of meat for all those that wish to eat it,  provided that certain principles are adhered to.

The principles of ethical hunting

These are some of my own principles,  everyone’s will vary a little.   But if we are to hunt ethically, it is important to know what our principles are and to try and stick to them

If we are shooting game animals it is important to ensure that a clean kill is achieved.  Sometimes shooters forget this in their pursuit of a ‘sporting shot’ .  In the UK for example,  the very high (and therefore hard to hit) pheasant is prized because it showcases the shooter’s skill.   However,  it is important that we do not forget that shooting birds at extreme ranges leads to more wounding.

Using a sufficiently powerful weapon and a sufficiently lethal load is important.  Bow hunting for example (illegal in the UK) is popular in some countries,  but is arguably less ethical than rifle shooting because the striking power of the slower travelling bolt is so much less than that of a modern high velocity rifle bullet.

I came across someone recently that was taking  a pride in shooting pheasants with a small bore .410 shotgun without giving due consideration to the fact that their weapon is responsible for wounding more birds than it kills.   This is not responsible or ethical practice.    Nor is the distorted view that only the highest birds are worth shooting.   This may give birds a ‘sporting chance’  but it also means that the shot is less likely to be lethal.

In my view, ‘sporting’  and ‘good practice’  are not necessarily the same thing.

Humane dispatch of the quarry is essential when hunting and most hunters do pay a lot of attention to this,  but not all.   Anyone that shoots without a gundog, for example,  is reducing their ability to humanely dispatch their quarry.

Last but not least,  the most basic justification for hunting must always be the provision of food.   Game should always be recovered,  and in a state fit for the table.  Every effort should be made to ensure that that meat enters the human food chain.  For every family that sits down to roast pheasant for their Sunday lunch,  one less chicken has to be raised in a shed with a thousand other chickens.

The knock on benefits of hunting

Providing an ethical food source is only one of the benefits of game shooting.  Hunting, as a side effect, also has a dramatic effect on our wildlife.   This is because of the habitat it provides through the revenue it generates.

A ploughed field offers little in the way of shelter and food for wild animals.

Game shooters are willing to pay large sums of money to participate in their sport,  and this money is used to create the habitat the game animals need to survive.  In the UK,  shooting is responsible for the maintenance of our many magnificent grouse moors and the stunning countryside that has evolved around the preferred habitat of pheasants (woodland edges).

This topography of woods and copses sprinkled across our farmland is a haven  for wildlife of all kinds.  Without pheasant shooting,  much of it would not exist.

Shooting benefits rural communities in so many ways.   Yesterday was the second shoot of our 2011 season and the weather was atrocious.   It rained relentlessly and sometime torrentially from before dawn until about 3pm as we were finishing up.  As a result I was unable to take any photos until we returned to the yard at the end of the day,  at which point the sun decided to make an appearance.  Just in time for me to photograph the birds before they were divided between us.

About twenty five people came out for the day.  Ten guns and a relatively small team of beaters and pickers-up.   Amongst us were three teenage lads on their half-term holiday,  boys who would otherwise probably have been sat indoors playing xbox or on facebook.

The physical benefits of a full day’s hard exercise,  are easy to define.  The social and mental health  benefits for everyone involved are more subtle but important.  The camaraderie and fulfilment of being part of an effective team,  of working together in difficult conditions to produce a great day’s shooting for the guns and enough meat to provide well over a hundred portions of delicious meat  are difficult to describe.

The pleasure of retiring to the pub,  gathering around a blazing fire to dry out and relax together exhausted and happy cannot be quantified.

You had to be there really.  And I was.  And it was just great.