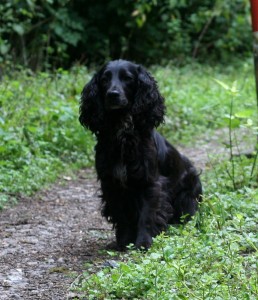 Please note: this article is for general discussion only and is not to be used as a substitute for veterinary advice. You must get your dog checked by a vet if he collapses or seems unwell whilst working, or at any other time.

I wouldn’t call it commonplace but it is not rare for a spaniel to ‘collapse’ whilst at work.

Perhaps we should define ‘collapse’  more carefully I am not referring to a full blown veterinary emergency.

The dog does not ‘drop on the spot’, lose consciousness fully or have a ‘fit’.

And it recovers quite quickly after a rest.

These kinds of attacks are thought to be due to extremely low blood sugar.  The dog just literally runs out of steam.  There is nothing left to power his muscles.[wp_ad_camp_1]He may go right over on his side, or he may just wobble a bit and lie down.

He may seem a bit ‘spaced out’  and dopey.   But a brief rest and a bite to eat usually has the dog looking none the worse for wear.

I have seen quite a few attacks of this nature over the years.

My husband’s cocker is quite a typical example,  we can now spot an attack coming on,  she will slow down and look a little disorientated, then she may lie down and be reluctant to walk.

Her earlier attacks were more dramatic.

And it  is no coincidence that she is a particular personality type and is ‘managed’ somewhat differently than my own cockers.  Even at ten years old she has only two speeds,  ‘stop’ and ‘flat out’, she is very excitable,  and her attacks have all occurred after sustained periods of hunting.

Working bred spaniels have a massive amount of drive and sometimes their head just seems to be unaware that their body has run out of energy.

Dogs that I have seen run themselves right off their legs in this way are often dogs that have been given a lot of leeway and allowed to hunt hard for sustained periods of time over quite a range.  They also seem to be more prone to being a little ‘hysterical’ and to squeak or yap when excited.

If the vet has confirmed the cause of the attacks, and is happy for you to keep working your dog, you can help to reduce the likelihood of further attacks through building up fitness gradually before the shooting season starts,  and by ‘controlling’  the dog’s range,  and hunting style.

My other half now keep his little dynamo a lot closer,  and gives her lots of breaks walking at heel in between short bursts of hunting.

He also carries liquid ‘honey’ to drip into her mouth after hard exercise and feeds her several times during the shoot day.

It goes without saying,  but I’ll say it anyway, if your spaniel collapses don’t ever just assume that low blood sugar is the problem.   Don’t try and feed him if he is not fully conscious and don’t carry on hunting him.   Get him to a vet.

There are plenty of serious reasons why a dog might collapse,  and though rare,  these causes need to be eliminated or your dog’s life could be at risk.   So get him checked over.

If your dog loses consciousness, appears to have had a fit, or does not start to recover within a few minutes of being rested,  get him to a vet immediately.

If your vet confirms that there are no other serious problems going on,  then you should find the precautions outlined above will eliminate the worst attacks and allow your dog to have many more happy years working in the field.

What about your dog?

Has your dog ever collapsed whilst hunting?  How do you avoid attacks of low blood sugar in your working spaniels?