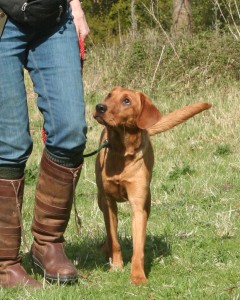 There are lots of different ways to teach a dog to walk to heel.

My methods have changed over the years but whichever method you use,  the key to success is simple.

Mostly people mess up for one (or both) of two reasons

Here is a fairly traditional but largely positive method.  It is taken from the Gundog Club’s Passing Grade One training guide.

This step may not work quickly for older dogs that have learned to drag you around.   If your dog is a confirmed ‘puller’ you can go to step 2.   This is however a nice gentle method which can be used on puppies with no adverse effects.

For the first two or three days you may get no further than three steps.

The penny will drop in another day or two and the puppy will realise that if he wants to keep moving, the lead must be slack.   This is all you require from a pup under five months old.  Formal heelwork drills are not appropriate.

Once you have your two or three steps,  all that remains is to build on them gradually and to introduce distractions in the same gradual manner.  This takes time,  but it works.

You can actually hasten the process above,  by using food. You’ll need a reward marker (a click from a clicker,  or a snappy word like ‘Good!’).[wp_ad_camp_1]As soon as the lead goes slack,  or the dog turns his head to look at you,  give your marker and drop a little bit of food just behind you (with your body turned away from the dog) as you move away.

He will then follow you,  collecting his food reward on the way.

You can then click and reward the dog as he moves into the heel position.

If he rushes past, stand, turn your body away,  and repeat the procedure again.

Another way to get those first two steps started is with a food lure.  Hold the food against your hip and release it for the dog when he has completed two nice steps at heel.  Once the dog has got the hang of the position,  you can put the food in a pocket or bum bag,  and gradually require longer periods of heelwork in exchange for the food.

In time,  food can be replaced with other rewards such as opportunities to hunt and retrieve.

Remember,  the key is to get those first two steps.  Once you can do two, it is just a numbers game.  Build up slowly.

Nowadays I quite often use food in heelwork training,  and teach puppies to walk to heel off the lead before I move onto leadwork.   I don’t use a lure,  but just click and treat the puppy for falling into step with me.

I can then become increasingly demanding as to the position which earns a reward,  the the length of time that the dog holds the position for.

If you drop food behind you and keep moving forwards the puppy will inevitably pass into the heel position again,  giving you the opportunity to reward him and reinforce the behaviour.

Puppies pick this up extremely quickly, and it is a simple matter to add the slip lead once they have got the hang of it.

Do you have a favourite method for teaching heelwork to puppies?  Have your methods changed over the years?  Add your comments below.