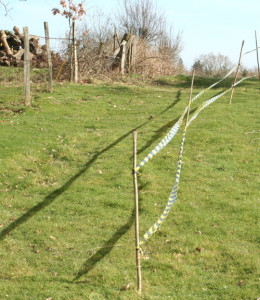 Spring is really here, and my world is beginning to dry out at last.

And I am so pleased to be able to drive across the grass to my favourite ‘lining’ practice zone.

Which is great, because Rachael has decided to add throw me another little challenge.

Rachael and I have been working recently on building up distances on her blind retrieves.

All was going swimmingly, and I was feeling smug, which should have rung alarm bells.

Because whenever I feel smug, Rachael can be relied upon to bring me down to earth.

For some reason, best known to her, after several weeks of perfect lining, Rachael decided one morning that straight lines were boring.   Instead, she added some variety to our practice session by throwing into her return, a large curve that any velodrome would be proud of.

If you are not sure why this is a big deal, check out this article:  Why straight lines matter

Rachael, always keen to spend as much time with her beloved dummy in her mouth as possible, simply stumbled upon the way to achieve her aim without slowing down.

But of course, after a second run, with the same result, it was clear that I was going to have to go back to the drawing board, and re-build those long straight lines all over again.

In doing so, I thought you might like to see how I created my personal portable retrieving alley

When teaching dogs to retrieve in straight lines, a retrieving alley is a big help.  But of course most of us don’t have the space and facilities to create long purpose built retrieving alleys.

With puppies, we make do with corridors and natural barriers.  Getting the dog to retrieve to you between two buildings, or through a gap in the hedge may suffice.   I use two long sheds with a gap between for some pups.

With Rachael, I was confident that this behaviour was not going to materialise in the simple settings.  And indeed, practising at home, she was fine.  It was these longer retrieves that were throwing up the problem.

What I needed was a really long retrieving alley that I could move around to different locations.

I was pondering this over breakfast when himself, who usually finds dog training about as interesting as watching paint dry, came up with some helpful suggestions, and a roll of builder’s tape.

There are quite a few places on the farm where there is a nice straight hedge or fence that runs for 100 yards or more. 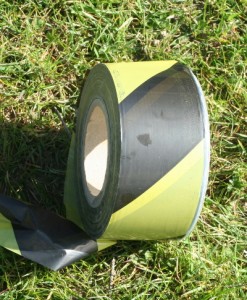 My first improvised alley (photo top right) consisted of a few simple hazel sticks, stuck in the ground, with some builder’s tape stretched between them.

The type of tape you see around building sites or crime scenes.

You can buy a big reel for a few pounds from a builder’s merchant.

I set my retrieving alley up alongside a fence, by pushing the hazel sticks into the ground at 15 yard intervals.  Then stretching two rows of the tape, top and bottom between the sticks to create a visual barrier.

It was a very flimsy affair and would not deter a ‘pottering’ dog.  But to a dog travelling at speed, it looks like a barrier and is a pretty good deterrent.

Fortunately speed is something Rachael really excels at.   Scatty, and puppyish she may be, but slow, she is not.

With my makeshift retrieving alley in place, we were soon running lovely long blinds in a number of different locations.

It only took a few minutes to peg it out.  The most fiddly part was winding the tape back up at the end.  However, there were problems with the design.

When I first started using this portable alley, it was very windy.

As you can see from the photos above, my hazel sticks were soon at a jaunty angle with the tape billowing and flapping in the wind.

This obviously is not very satisfactory and is distracting to the dog.

Then the ground began to really dry out, and it became harder and harder to get the sticks into the ground.

I was soon faced with the prospect of adding a large mallet to the already burgeoning bundle of equipment in the back of my car.

I have to confess, I did moan about this, quite a bit, to anyone that would listen.

Fortunately, Himself knows exactly how to make a girl feel special.

“I’ve bought you a present!”  Says he excitedly one evening

You won’t be surprised to discover that my gift was neither flowers, nor perfume,  but a large pack of ten electric fencing posts.

These are rigid plastic posts about a metre high, complete with a nine inch metal spike at one end, and a ledge to press down on with your foot. 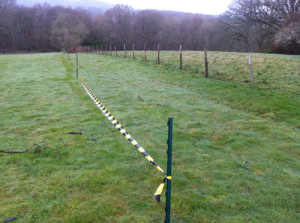 It takes two seconds to push each post into the ground and they remain doggedly upright in the strongest wind.  There are even slots to hold the tape.  You can leave up to twenty yards between the posts without too much ‘sag’.

The whole pack cost a tenner.

So I now have a portable retrieving alley, up to two hundred yards long, that takes only a few minutes to erect,  and to put away.

I’m hoping I will be able to dispense with my retrieving alley soon.  But no doubt Rachael will think of something else to challenge my ingenuity.

I’ll be back to tell you all about it when she does.

Let me know if you decide to make use of the idea, or if you have any alternative suggestions for other readers to try.