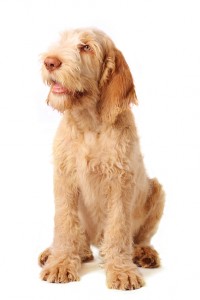 I frequently get asked about whining.

Mostly people want to know how to fix it.

Sometimes they want to know how to prevent it  – which is easier to address.

Whining is very common.  At home, in vehicles, on shoots and in training classes.

Will I be expelled?

Sometimes people worry that whining will get them expelled from their gundog class.

Or thrown off a shoot.

For the most part, these fears are unfounded.

Whilst whining is a ‘No-no’ in competition, you are unlikely to be thrown out of a gundog class, or off a shoot, because of it.

However, others may find it annoying and there is a fear (maybe unfounded) that it is catching.

So you may find people shuffling away from you, as you approach with your dog!

He didn’t whine before!

Some people are very disconcerted because a previously quiet dog has suddenly started whining.[wp_ad_camp_1]But the fact is, whining often appears towards the end of the first year in a dog reaching full maturity.

Even though that dog may have been relatively quiet as a puppy.

Whining at home is usually related to frustration (“why isn’t my dinner ready”, “why are you leaving”, “why am I shut in my crate”)

Provided other members of your household will co-operate with your training efforts, it is largely treatable because at home you have a great deal of control over your dog’s environment.

Whining in training or at work is almost always associated with extreme excitement and is likely to be worse if the dog is frustrated (ie watching others retrieve, or during swimming where the dog’s speed is curtailed)

What about a cure?

Established whining in the field, is usually considered almost impossible to cure.

So many gundog trainers will try and ‘nip it in the bud’ very early on with aversives (a slap or a poke).  This sometimes works, and sometimes does not.

Sadly, I have never cured an established whiner.  I don’t know anyone else that has either.  Of course, that is not to say it is impossible.

Because whining is a fault in competition, and annoying in the field, many serious gundog trainers will rehome a chronic whiner.  So from the dog’s point of view, as well as the trainer’s, it is a serious problem.

Preventing whining from becoming established may be more achievable than a cure.

Preventing whining in the home, won’t necessarily prevent whining in the field.  But it is certainly worth doing, as a dog that whines at home when frustrated, may be more likely to resort to whining when under pressure outdoors.

The most important strategy you can employ at home is to ensure that the dog never gets any kind of reward during, or immediately after whining.

You need to be very clear on what defines a ‘reward’.   This isn’t just about praise or even treats.  Letting a dog out of a crate, or through a door during or after whining is a powerful reward.  Even attention, such as eye contact or your presence in a room, can be a reward for a bored or frustrated dog.

Essentially a ‘reward’ is anything which pleases the dog.  So you need to look at the situation from his perspective.

Nothing good (in your dog’s eyes) should ever follow whining.

There are also some more strategies which you may read or hear about.  Some may be more effective than others

Here are four more strategies that you may consider using, in order to prevent whining becoming established.

Many of us tend to ignore our dogs when they are quiet.   If you are concerned about noise, you need to make a lot of effort to ‘notice’ your dog’s quiet times, and reward him for them.

Place a treat between his paws when he is relaxing.  If you leave the room for a moment and he is quiet, give him a treat when you return.

If your dog whines when crated or left alone in a room,  use the Click for Quiet technique to stop him.  It is very effective, and worth starting right away.

Obviously you won’t be able to avoid all triggers for whining,  but the less often the whining is triggered, the less likely it is to become a habit.

So, wherever possible, and practicable, make a bit of effort to avoid behaviours on your part, which you know are likely to bring on whining on his.

For example.  If a dog whines whilst food is prepared, I don’t let them see food being prepared. Even if that is difficult or inconvenient to arrange.

Whether or not to punish is a personal decision.  A short sharp fierce NO will stop some dogs long enough for you to then distract and reward them for quiet.

Some of you will be tempted to physically punish a dog for whining.  I have certainly done this in the past.  But whilst it may reduce the frequency and volume of whining, on the occasion on which it is applied,   I have not found it to be particularly effective in the long run.

You tend to find that a ‘tap’ today,  needs to be a ‘slap’ tomorrow.  As always, punishment has a horrible tendency to escalate.

For objective information on this important topic, please read: The use of punishment in dog training

Most of the really bad whiners I have met, have been introduced to the shooting field, or competitive retrieving at a young age.  Often at less than a year old.

Nowadays, I introduce my dogs to fieldwork slow and late.

Many of my dogs will be over two years old before they are working regularly on shoots.  I believe this policy has had a significant effect on avoiding whining (which I personally loath).

Take your time over introducing your dog to live shoot conditions.  If he is getting overexcited, and you are losing his focus on you, don’t hesitate to put him back in the car, or even take him home.

There is always another day.

Whining seems to arise through a combination of factors.

There is a genetic element to whining, simply because it is an eliminating fault in field trials.  This means that quiet dogs are more likely to be bred from.

However, the environmental contribution is significant, and it is very easy to turn a well bred working dog in to a gibbering whining wreck by inadvertently exposing the dog to situations with which it cannot cope.

At the end of the day, your dog may whine under field conditions, no matter what you do.   So you should not beat yourself up if your dog is a whiner.

Even the most experienced trainers will have some dogs that they cannot keep quiet!   On the other hand,  don’t underestimate your capacity to influence your dog.

Make the effort to prevent whining at home,  and introduce your dog to the shooting field at the right pace for him.  Which may be slower than you would like.

If you do these two key things, you will have no cause for regret should you have a problem later on.

If you have had some success with reducing or curing whining, do share your tips in the comments box below!