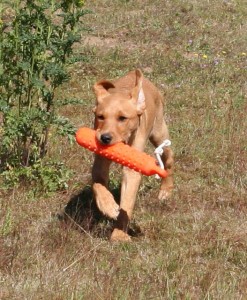 A couple of weeks ago we looked at establishing a basic puppy retrieve and at what you should be hoping to achieve in your training sessions.

But what if your sessions did not go according to plan?

The pup who won’t chase

If your pup does not chase the first object you throw for him, try some others.

Rolled up bits of fabric, soft toys, a rolled sock, something you have seen him carry. Be inventive.

Following a moving object is a very natural behaviour for most gundogs but occasionally problems occur.  If the puppy shows no interest at all when you throw a retrieve for him, try the following.

Sit on the floor in a quiet room and gather the pup onto your lap.

Have a very small soft retrieving dummy in your hand and gently tease the pup a little with it  – touch it to his lips, rub his tummy with it, if he shows some interest in the object, trying to paw at it or nip it, toss it a few feet away on to the floor.[wp_ad_camp_1]If he runs up to it and picks it up quietly tell him what a clever chap he is.

If he still show no interest, try rolling a ball along the ground backwards and forwards in front of him, again rub his tummy with it, tease him gently with it, hold on to him whilst you tease to try and get him a little excited about it.

Let him almost get it, but not quite.  When he is showing an interest gently roll it away and release him as you do so.

If that doesn’t work try a rolled up sock. Pick one that a member of the family has been wearing so that it smells interesting.  Tease and throw, tease and throw.

Get him outside with a friend and start gently nudging a small ball backwards and forwards between you.  Get the friend to roll the ball past you and the pup, then you chase the ball  and see if the pup will join in.  Mind you don’t trip over him.

When it’s time to take a break

If all this fails to arouse the pup’s interest, then put retrieving aside for a couple of weeks.  Give him time to mature a little, and then try the whole process again.  Some pups that show no interest in chasing anything at 8 or 9 weeks old are chasing a ball or dummy keenly a few weeks later.

If the pup cannot be encouraged to chase any moving object at all by the time he is five or six months old, you can teach him to retrieve from the ‘hold’ backwards with a clicker.  Instructions for this can be found in The Gundog Club’s Grade One training  guide or on The Gundog Club’s website.

Picking up the retrieve

Most gundog pups will soon be chasing the sock/ball/dummy and grabbing it in their mouths.  A few will chase but not pick up.  Again gentle teasing and getting the pup excited about the object will help.

You need to make him really want it.  Once he wants the object badly enough he will pick it up, so it is up to you to make it more attractive.

You must either change the object to something more desirable, or change how the object behaves (rolling, bouncing, etc) to make it desirable.  Be patient and give it time.  It is most unusual for a pup that will chase, to persistently refuse to pick up a dummy or ball.  Few dogs can resist a rolling, bouncing tennis ball.

If the pup will chase a ball or dummy outside, then throw one for him, and as his head goes down towards it, turn and move away from him.   If he is possessive of the retrieve he may be inclined to run away from you.  You moving away from him will encourage him to follow you.

Never follow the pup once he has something in his mouth.   As he starts to come back get down low (crouch or sit on the ground) to make yourself inviting and non threatening.

Encouraging the pick up

If he has not picked up but his interest in ‘mouthing’ the object on the ground seems to increase when you praise him, then praise some more. If however you find him turning away from the object in response to your praise then remain quiet and still, let him sniff and examine the object for a few seconds, then turn and run away from him.

He will then have the dilemma of choosing between you and the object.   A lot of pups in this situation will make a quick decision to bring the object with them.    You may need to try this several times before picking up the object occurs to him.

Try all these things a number of times, with a number of different objects  – you may find some days he is interested, others he is not.  Often a pup will pick up once or twice then lose interest.   Once he is starting to pick up fairly regularly it pays to ration these early retrieves quite strictly.  Make them special, a real treat.

Make sure he only has access to this item during your retrieving sessions.  If he loses interest after picking up regularly for several weeks he may have a sore mouth from teething.   The teething process should be complete by seven months of age. Until then, very soft objects may be acceptable to him, or you may need to wait until teething is over and try again.

If he brings the dummy back to you when he has picked up (and some pups do this from the very beginning) that is a real bonus. Again, remember not to snatch, let him hold it for a moment or two, all the while praising him.  Then repeat a couple of times so that he does not associate coming to you with the end of the game.   It is a really good start to your team relationship.

Once the pup has picked up a thrown object you need to ensure that he returns directly to you with the object in his mouth.   You may experience a variety of reactions.  Some pups will bring a dummy straight back from the very first day.  Others will be less obliging!

In Part Three we’ll look at getting a great return and delivery.

This article is adapted from ‘The Right Start’  available from The Gundog Club bookshop.

Note:  white or light coloured dummies are better for first retrieves than the orange one pictured!