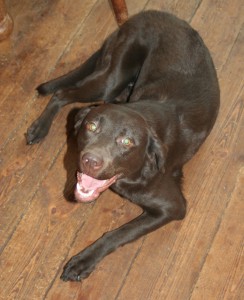 A few days ago, I taught Rachael to lie down using a clicker.

It took me four sessions.

I don’t always teach my gundogs to lie down, but Rachael lives in the house and the ‘down’ is a useful command for a ‘long stay’.

I also teach a ‘down’ to dogs that are going to be used for deer stalking as the dog may need to keep very still or lie at the bottom of a high seat for long periods of time.

The way I do this varies from dog to dog.  Some dogs lie down naturally quite often, and in this case I simply ‘capture’  each down with the clicker and follow it with a treat.    Some dogs can be taught the down in a single session like this.

For Rachael, the down is not at all a natural position.  She prefers to stand or sit, and only usually lies down in her bed or to chew her rawhide bone.   So I decided to lure her into the down.

I waited for Rachael to sit.  I did not give a ‘sit command’ as there is a risk that luring the down will make the dog get up again, and I don’t allow my dogs to get up from a ‘cued’ sit until released.

I held a piece of cheese where Rachael could see it and she sat.  I then moved my hand with the cheese in it, towards the ground.  Sure enough Rachael immediately got up again.  As she stood up I raised my hand back up and she sat again.   We did this several times until she remained sitting whilst I lowered my hand to the ground.  I then waited and clicked as she lowered her head and shoulders to sniff my hand.

As soon as I clicked I released the cheese.

We repeated many times, and gradually I moved the goalposts so that Rachael was having to lower more of her body in return for the cheese.   It took a couple of sessions to get Rachael into the down position and I spent the next  session fading out the lowering of my hand until Rachael would lie down simply at the sight of my hand palm downwards in front of her.  I then began to add the cue ‘down’

Got it in four?

At the end of the fourth session,  Rachael was lying down on cue, albeit very briefly.    I said earlier that I taught Rachael to lie down in four sessions,  but actually I fibbed a bit.   What she is actually doing is anticipating my wishes.

The chances are,  she initially decided that  ‘down’ is my new preferred default behaviour whenever she does not know what to do.  This is quite normal.   A dog will switch one behaviour for another quite readily.  It is only when you begin asking it to differentiate between two different positions that the dog really learns the meaning of each

So yesterday morning I began to include some ‘sits’ into our session.    And sure enough,  on hearing the ‘sit’ cue, Rachael immediately threw herself into a ‘down’.    I then lured her back into a sit and rewarded her.   I had to repeat this several times before she began sitting on cue again.

Then we went back to ‘down’.   No problems there,  she was very happy to practice her new position.   Switching back to the ‘sit’ again needed a couple of lures.

By the end of the day, and after three more sessions,  Rachael was able to accurately respond to either the sit or the down cue with only the occasional mistake.

Obviously we now need plenty of practice to establish this new behaviour in lots of different locations, and I will start to add in duration,  distractions and distance gradually over the next few weeks.