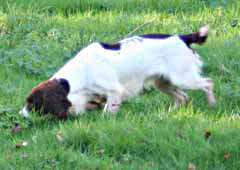 From time to time people tell me that they think it is a bad idea for spaniels that are intended for beating, to be taught to retrieve.

The theory is,  that teaching a spaniel to retrieve might compromise the dog’s behaviour in the beating line and encourage the dog to chase game.

It has even been suggested that the Gundog Club’s Grade One spaniel test should not include retrieves.

This is an important issue and deserves proper consideration.

Spaniels and retrievers have different strengths and roles. The Gundog Club’s level one grading recognises this by having different requirements for spaniel heelwork and patience on the ‘stay’.

As we work up through the grades the hunting part of the spaniel’s role becomes increasingly important.  By grade three, the spaniel who passes his field test must demonstrate an effective hunting pattern and control during hunting by the handler.  So, if hunting is the spaniel’s primary role, why do we include retrieving so early on in the training process?

The spaniel is a dual-purpose dog. His primary purpose is hunting and his secondary purpose is retrieving. He has been bred with these priorities in mind.

Because of this breeding, the hunting drive of the dog often takes precedence over retrieving.  It is therefore very important that retrieving is established early on in the spaniels training.

Failure to do so can result in a spaniel that will not retrieve.  This is something all successful spaniel trainers agree upon.

.  The Author  – Mike Smith of Mailscot Spaniels  –  is one of the U.K.’s most respected gundog trainers. His book is widely regarded as one of the best spaniel training books on the market.

The quote is taken from the first paragraph of his chapter on ‘Puppy Retrieving’ and really sums up why we need to get our spaniels retrieving at a fairly early age.

“Under no circumstances whatsoever should you later progress to hunting your spaniel if his retrieving is not up to standard.  If you do so it is likely that the hunting instinct will dominate and the retrieving deficiencies or faults will persist forever more”

So what about spaniels who will be used for beating?  Won’t teaching them to retrieve encourage them to chase game as some spaniel owners fear?

The ‘stop to flush’

It is very important that spaniels are taught not to chase game.  However, we do not prevent a working spaniel from chasing by ‘not allowing it to retrieve’.   That would be counter productive to the purpose of the dog as I will explain below.

We teach a spaniel not to chase what it has flushed, by  training the spaniel to ‘sit (or stop)  to flush’.  This aspect of spaniel training (stopping on the flush) is taught later in the training process once the dog is hunting well and stopping sharply to whistle.

It is facilitated by ensuring that the dog is not introduced to game too early on in training.  In other words,  we do not allow our spaniels to have contact with game,  especially in the exciting environment of the beating line, until training is well advanced.

A good stop whistle and recall response must established,  followed by training a ‘drop to fall and shot’ long  before the dog is  finally  taught to ‘drop’ to a real live, over whelmingly exciting, flushing bird or rabbit.

It is true that some spaniel owners who use their spaniels for beating, do not teach retrieving, perhaps because they feel this reduces the likelihood of them having difficulties achieving a ‘stop to flush’ later on.   In practice,  failure to train the dog to retrieve is unlikely to alter the chasing habits of a dog which is not well under control

The prey drive of the majority of working spaniels is extremely intense, many such spaniels will instinctively chase a flushing bird or rabbit whether or not the dog has had any experience of retrieving, as many pet dog owners will testify.

Failing to train a spaniel to retrieve will not prevent any well bred working spaniel  from chasing game. Only good training will do that.

Beating is a very demanding role

A beating dog is sometimes regarded as one step down from a ‘proper shooting dog’.  Nothing could be further from the truth. Beating is one of the most demanding and testing aspects of spaniel work to be found in this country.

It requires a high level of steadiness and control.   This takes time and patience.  Many young dogs are taken into the beating line too soon  – control of the dog may easily  be lost before the whistle is blown at the end of the first drive.

Most spaniels will not be ready for the beating line before their second birthday.  Even then, caution is advised and an assessment should be made of the temperament and readiness of the dog.  Rough shooting and picking up are good ways of introducing a spaniel to a shooting environment and ensuring high standards before introducing the dog to the rigours and temptations of the beating line.

The retrieve as a reward

Perhaps one of the most important aspects of retrieving for all gundogs (apart from setters and pointers) is the value of the retrieve as a reward.

The use of the retrieve as reward in training should not be underestimated.  Without it training for any spaniel (and his handler)  would be a lot less fun.

Do teach your spaniel to retrieve

The modern working spaniel is a truly dual purpose dog.  And whilst hunting is his raison d’etre,  most spaniels (and their owners) derive an enormous amount of pleasure and benefit from the retrieving process.

I believe very strongly that all spaniels,  pet or otherwise should be taught to retrieve.  Not only because it is a major part of the working spaniel’s role, and for the pleasure that it gives him.  But also because it is the single most effective way of exercising a spaniel whilst retaining complete control of his whereabouts.

Control issues are a huge problem for many working springer owners.   Retrieving is a great way to exercise a dog whilst remaining fully engaged with him.  The importance of retrieving in keeping your spaniel amused and healthy cannot be overstated.

If you would like to know more about the Graded  Training Scheme for gundogs please visit the Gundog Club website.   You can find more articles on retrieving on this page: Retrieving