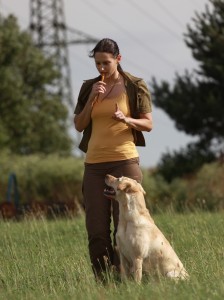 Or, “will I still need a whistle if I clicker train?”

It is clear that whistle training and clicker training are seen by many in the gundog community as potentially interchangeable.

And as two different ways of training a dog

Whistles have long been associated with dog training.[wp_ad_camp_1]And especially with training dogs that need to be controlled at some distance from their human partners.

Whistles can be introduced right at the beginning of training.

But are often introduced later on, when we want to start handling the dog at a distance.

Clickers on the other hand are a relatively modern invention.

And whilst clicker training has been widely adopted by pet dog trainers, only very recently have clickers been seen as in any way relevant to the serious working gundog owner.

Clickers are used in early training, to establish new behaviours.  They are not needed once training has advanced and the dog knows what is expected of it.

One important thing you need to know is that clickers don’t tell dogs what to do.   I’ll explain this in more detail below.

So which path should you choose for your gundog?

Actually, if we look a bit closer, this is a very odd question. It’s rather like asking “what do I need to write a letter,  a pen, or some paper?”

The fact is, computers aside, you need them both.

If you want to post a letter, then pen and paper are neither interchangeable nor even comparable.  They fulfil two totally different functions. One is a writing tool, the other a writing surface

And so it is with whistles and clickers.

Here’s the thing. If you want to clicker train your gundog, you are still going to need a whistle.

And if you want to whistle train your gundog, you will still benefit from a clicker.

Each has its own distinctive purpose, and neither is a replacement for the other.

What whistles and clickers have in common

Whistles and clickers are both man made tools for creating signals.   These signals, or at least signals that serve the same purpose, can also be created without the tool.

Some people for example have the enviable ability to emit a range of piercing whistle with their own mouth and a couple of fingers.  But the rest of us mere mortals will benefit from a plastic gundog whistle.

You may be able to make a distinctive clicking noise with your mouth, but again, the clicker is probably a tool that most will benefit from as it offers the precision and power that most people can’t replicate by themselves.

The fact that whistles and clickers are both man-made tools for creating signals, is where the similarity ends.

Where whistles and clicker differ

The difference between whistles and clickers lies in the role or function that these signals perform.

These two types of signal are very different in function.  You can click on the links for more information about each.

But briefly, a cue tells a dog that he is expected to offer a response. He only offers the correct response because he has been trained to do so.

An event marker tells a dog he just did something you liked.  The event marker also encourages the dog to repeat the behaviour that was marked, because it is also a reward predictor.

You can find out more about the way a clicker works in this article What is clicker training all about.

Sometimes you will use something other than the whistle as your cue.  You might raise your arm for example to send him back, or pat your thigh to bring him to heel.  These are all cues.

This is the action you have trained, or are training your dog to perform as soon as he hears or sees the cue.  If the cue was a single blast on the whistle, the response would be a sit.

This is the event mark (nothing to do with marked retrieves) that accompanies the response.  If your event marker is a clicker then the mark is a click.  And it needs to accompany the correct response precisely so that it identifies the response for the dog.

When we use an event marker, we almost always follow it with a reward.  Rewards reinforce behaviour, which simply means that it makes the behaviour more likely to happen again.

This is a simple example of a training sequence that we might find in a basic behaviour like a whistle sit’.

So our sequence would be

As you can see from this example, the peep from the whistle and the click from the clicker are both used in clicker training the whistle sit.   The signals and reinforcement we use may vary.

The cue doesn’t have to be a whistle, it could be the word SIT

The event marker doesn’t have to be a clicker, it could be a verbal YES or GOOD

The treat doesn’t have to be an edible one, it could be a retrieve.

Clickers and whistles are not interchangeable in dog training, they each have a different purpose.

Although they are both signals, they fulfil very different roles. One is a cue, the other is an event marker.

What matters is that we understand the different roles of cues, and event markers.   And the way that clickers and whistles are used in teaching a dog to respond to a particular signal from his handler.

In theory, we could swap whistles and clickers around.   Whistles have been used as event markers in training marine mammals for example.

But  in dog training we need to use whistles for cues.

Not only are they the traditional tool for the job, they are also much better cues than clickers.  Their sound carries a long way, and can be lengthened or shortened to create several different signals, such as the recall, the turn, and the stop signal.

It makes sense therefore to stick to whistles for telling dogs what we want them to do,  and clickers for marking behaviours in early training.