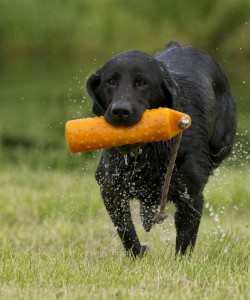 Your dog’s ‘desire’ to chase and grab a moving object, is the engine that powers the retrieve.

If he doesn’t want that ball or dummy, it can seem as though you are stuck.

And if he wants it, but doesn’t want it badly enough, he’ll certainly give up if the going gets tough.

There are three popular ways to get a dog to want to retrieve.

Let’s look at each in turn

The first and easiest way to get that retrieving drive going, is to nurture and build your dog’s natural retrieving instinct.[wp_ad_camp_1]There are a couple of problems with this approach.  Especially for an inexperienced trainer.

One is that the drive itself can be fragile and easily messed up.

The second is that some dogs don’t have much of it.

The second option is to teach the dog to retrieve to avoid pain.   But in order to get the dog to avoid a pain, we first have to apply the pain to the dog.  And for many of us this is not ethically acceptable.

Using pain, or ‘force fetching’ as it is known in the USA, in retrieving usually involves an ear pinch or toe hitch.  Pain is applied to the dog’s ear until he opens his mouth, at which point a dummy is placed in it.  Later, the dog is taught to ‘drive’ hard on to the dummy in order to shut off the pain.  Later still, the ear pinch is replace by an electric shock.

Force fetch and forced retrieving is not usually practiced here in the UK but is considered essential foundation for e-collar training in the USA, the principle of which is that the dog reacts to any kind of pain or mental pressure by powering onwards towards the retrieve.

The third option is to teach the dog to grab a dummy in exchange for an edible reward.   The grab is then developed into a hold and a release, and finally the retrieve is tacked on to the grab.  This technique is widely practiced in obedience circles in the UK

The use of edible rewards in retrieving or in fact any other aspect of gundog training was, and still is in many parts of the gundog community, frowned upon.

And many trainers believed that giving edible rewards for the retrieve made it impossible to get a delivery to hand.

We now know that isn’t true.   And the clicker retrieve is so successful that it is at last beginning to take off within the working gundog community

In the UK traditionally in the gundog community we have relied largely on building and maintaining natural retrieving desire.

In some ways this is a good thing because it meant we bred dogs with stronger and stronger retrieving instincts.

In others ways it was not such a good thing, because it meant that many perfectly serviceable dogs were denied the pleasures of gundog work.  Either because an inexperienced owner messed up their retrieve drive, or because they had hold or delivery issues.

Does the trained retrieve spoil the gene pool?

I have heard English gundog trainers claim that USA field trial dogs will lose their natural retrieving desire if the use of force fetch persists.

I have also heard them make the same claims about the clicker trained retrieve, that it may mask a lack of retrieving desire and that widespread use of this technique will lead to poorer working gun dogs in the long run.

These are clearly issues that people are concerned about.

And so there is a question mark hanging over the issue of any kind of ‘trained retrieve’.  Whether or not it involves pain, or the use of rewards.

The concern is that in theory, if we help dogs to become effective retrievers through artificial means, then we will end up breeding from dogs that are not natural retrievers.  In other words we will be effectively masking a real problem in our working gundog gene pool.

These fears for our gundog gene pool are probably unfounded.  There seems to be no evidence to suggest that USA field trial stock is losing its retrieve drive.

Force fetch is not applied to dogs until they have demonstrated plenty of enthusiasm for the retrieve as puppies, and this is part of the key.

Nor is there any reason to believe that the clicker trained retrieve will have a similar consequence, because in practice the second and third options (pain or reward) discussed above are often combined with the first (natural desire).

In other words, we take dogs with natural high drive, and tweak it a bit to establish some controls over the process and get the results we want.

So that brings us to which of the two options, pain or reward, we should be using to impose that control.

Which of the two, the force-fetch or the clicker retrieve, is the most successful way of establishing a good hold, and delivery.

The answer is that both the clicker retrieve and force fetch are highly successful ways of establishing the control, precision and reliability we need in a working retriever.  Both can also be used to teach a retrieve from scratch, to a non-retriever.

The method that causes no pain or harm to the dog is therefore the obvious choice.

The benefits of the trained retrieve

Many gundogs have an imperfect retrieve, and many novice gundog owners struggle to get the basic retrieving process tidied up.  They struggle with delivery problems, with dogs that won’t bring the retrieve back, or with dogs that just aren’t that keen on retrieving.

The clicker trained retrieve overcomes all these issues and causes no harm or distress to the dog.

I believe that retrieving is important for all dogs, no matter what breed, as it enables owners to exercise their dogs under very controlled conditions. But it is especially important for working bred gundogs even and perhaps especially in pet homes, where many owners get into difficulties with control issues.

The clicker retrieve also enables dogs with low natural drive, that might never have had the pleasure of gundog work to participate in this beneficial activity.

Some people are concerned that man-made interference with the retrieving process may result in us losing our genetically programmed retrieving instincts.  These concerns are applied as much to force fetch as they are to reward based retrieving like the clicker retrieve.

However, these fears are probably unfounded.  The trained retrieve, of any kind, is probably not sufficient in itself to produce a field trial champion.  A ‘man-made’ retrieving response in a dog with poor retrieve drive, will probably never get the kind of retrieve that we will see in a dog that is brimming with natural desire.

So those in control of our core retriever gene pool will probably always need to begin at the beginning, with desire.  Control over the hold and delivery can be added later.

I think that starting with desire is also good principle for any of us that aspire to a high standard of gundog work.

I recommend you get the retrieve drive established and nurtured at an early age. It will stand you in good stead as your dog moves on to advanced and more challenging retrieves