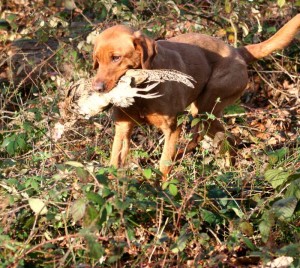 I have received a number of questions lately from people that have been having some problems with the way that their dogs have handled their first few real game retrieves.

Either because the dogs have been running away with retrieve,  or just refusing to let go of it.

Equally common is the young dog that just sniffs suspiciously at the bird and then returns without it.

The common factor  in all these questions is an inexperienced young dog,  but an additional factor is often that the dog has been taken straight from dummies to fresh, warm,  game.

So if you are intending to take your dog shooting for the first time this season,  don’t throw him in at the ‘deep end’.

Now is the time to start practicing.

The benefits of cold game practice

I appreciate that this isn’t easy for everyone,  but because it is important for a young dog to practice on cold game before you take him picking up, you will need to acquire some dead pheasants.[wp_ad_camp_1]Most serious and professional trainers will keep a stock of frozen game in their freezer for introducing young dogs to game before their first outings.

You may have to pay for a lesson to get access to these frozen birds, but you’ll probably find it helpful to have some experienced advice.

If you beat or help out on a shoot,  once the season is underway, ask the shoot captain if you can purchase a brace of birds for your dog to practice on.  Make sure that they are ‘cleanly shot’.   A speck of blood doesn’t matter,  but make sure the bird has not been ‘mangled’.  You don’t want lumps of flesh or congealed blood all over them.

Do not ‘gut’ the birds!  You will be using them just as they are.    Start the dog off with the hen bird.  She is lighter and smells much less strong.

If he hesitates for a while over the hen bird just tell him ‘good dog’  ‘fetch it’  or whatever you normally say,  in a calm encouraging voice.    Sometimes a toot on the whistle will encourage the dog to pick up and return,  but other dogs will just leave the bird and return without it.

What if he won’t pick up?

Try the whole scenario again.   Set out the dummies, and the bird in between, and work through sending him for a couple of dummies first .  This just reminds the dog that its retrieving time.  It may take a few attempts with the dog showing increasing interest in the bird.  The first few times he may pick it up by a few feathers and then drop it again.  Or drag it a few yards by a wing tip before abandoning it.

Don’t worry.  This is perfectly normal.   A little more practice will have the dog carrying the bird properly.   Sometime though,  the dog really does not want to put the bird in his mouth.

If you have a trained dog to hand,  you can make your dog watch while the other dog demonstrates what to do.  This can sometime help.   If not,  and if the dog will not pick up after several attempts of mixing dummies and the bird together,  it is time to make the bird less ‘bird-like’.

Cut the leg of a ladies pair of tights,  or get a ‘pop sock’  of the same material, and put the hen bird inside it.  Make it into a neat parcel and use this as a retrieve.

Almost all dogs used to retrieving dummies will retrieve your ‘stockinged’ bird.   Now pull out a feather or two and repeat.

Put the bird parcel in the fridge overnight and the following day try again and pull out a few more feathers.   Over the course of  half a dozen or so retrieves,  you will be able to pull off most of the mesh and the dog will be effectively retrieving the bird.

What if he won’t give it back?

Sometimes we have the other extreme.  The dog likes the bird so much,  he does not want to let go.

You will need to walk the dog up and down at  heel until he starts to lose interest.   Sit him up at intervals and try again.  Keep him well away from other dogs during this process.

He will get bored eventually and give up his prize.  Reward profusely and preferably give him some more retrieves there and then.

Once your dog has got the idea,  you can make your retrieves of cold game more realistic.   The young labrador in the picture above is practicing picking birds out of cover,  in preparation for the real thing.

Remember that these kinds of problems are common and simply the result of inexperience.  Your dog will soon be retrieving like a pro!

You can read more about dogs that don’t want to hand over the retrieve in Delivery problems: playing keep away

Don’t forget, when you have finished with your pheasants you can either eat them or freeze them for use again later!