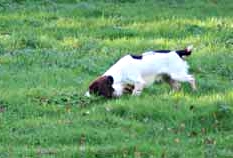 Ignoring a dummy in favour of hunting is quite a common problem.

It tends to be an issue experienced by some spaniel owners once their dog is working on real game.

The habit often begins quite subtly and you may think at first that your dog did not see or scent  the dummy.

If no action is taken, before long it becomes  quite clear that the dog is deliberately ‘ignoring’ the retrieve.

What causes refusal to retrieve dummies?

The reason for the problem is that the dog’s hunting drive overwhelms his urge to retrieve dummies.[wp_ad_camp_1]A spaniel’s first love is often hunting.

Which is why we see the problem more often in spaniels, than in retrievers.

The dog will usually carry on retrieving game as this is more exciting for him.

This may not be a problem for everyone, but if shooting is quite a small part of your dog related activities, and you want to keep your dog fit and in practice when not shooting, then it is a most annoying development.

Carrying bags full of cold game around to practice with is also very inconvenient.

So what is the cure?

You can greatly reduce the incidence of your dog ignoring or ‘blinking’  the dummy by following a particular routine.

Every time you take your spaniel out for exercise, have him retrieve a dummy fresh out of the car/house.  Do not allow any free running at all until he has completed a retrieve.

If he blinks the retrieve, put him back on the lead or in the vehicle and try again later.

Most spaniels quickly realise that if they don’t retrieve your boring old dummy, life is going to get increasingly dull.  Sooner or later,  usually within a day or  two, you will get a retrieve.   Once the dog has completed a successful dummy retrieve,  give him masses of praise and allow him to hunt for a few minutes.

Repeat for a few days until he is retrieving that dummy like a pro.

The next time you go out, ask for two retrieves before hunting is permitted.  Build up the number of retrieves gradually as you would with a puppy.

Stick to your guns and put him back on the lead or better still back in the vehicle if he refuses a retrieve. Once he has started retrieving again,  you may find you can focus him on the retrieve with verbal rebuke (ah-ah)  or a sharp NO,  if he runs past an obvious dummy on the ground.

Back on the lead if the rebuke doesn’t work and he will pay more attention next time..

Teaching a trained retrieve may also be helpful with dogs like this,  as it creates a ‘trained response’ that you can then proof against different distractions.

As with most things,  prevention is better than cure.   Maintain your spaniel’s retrieving drive from the very beginning by never allowing any hunting until the dog has completed some retrieves.

Don’t have a retrieving session on dummies after the dog has been hunting for any length of time.   The same rule applies to a dog of any breed  whose retrieving  drive is ‘suspect’ or that has lost some enthusiasm for dummies.

A dog that has been confined in a house, kennel or car is far more likely to retrieve for you than one that has been allowed to hunt.