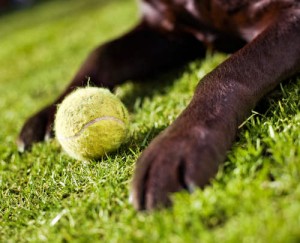 Dummy or ball, if you are having to pick yours up off the ground, your dog isn’t really doing his job.

Dropping or spitting out the retrieve is a very common problem in gundog training.

There are lots of different reasons why it happens and different ways to fix the problem.

We’ll have a look at some of these today. But first, let’s talk about why it matters.

Why does spitting out the dummy matter

If your gundog is a pet, and you have no intention of ever working him in the field and if you have a nice strong back, then dropping the retrieve doesn’t matter.

Working gun dogs will at times have to deliver wounded but live animals and birds to their handlers.  If these wounded animals are dropped onto the ground they may well get up and run off again.

It is vital for the swift and humane despatching of wounded game, that all game is delivered into the hands of the dog’s human partner.

If you want to work your gundog on game, or you simply don’t want to keep bending over to pick up the ball or dummy you just threw for him, then you are going to need to teach him to place the ball in your hand.

Why do dogs drop the dummy

A great many very soft mouthed dogs will drop and fumble dummies when they are young and inexperienced.

You can tell this kind of dog because the dropping usually happens whilst he is galloping along.  The dummy will slip or fall from his mouth and he will usually just pick it up again and continue on his way.

You can ignore this kind of dropping, it simply resolves with practice.

Some dogs will drop the dummy because they lose interest in it once they arrive back to their handler, it just doesn’t occur to them to hang on to it.

Yet others will spit out the dummy because their inexperienced handler has inadvertently rewarded them for doing so.

Can it be cured?

The answer is yes, spitting out can always be cured, no matter what caused it.

First of all, don’t worry about this problem, it isn’t difficult to fix. It is a lot easier in fact, than dealing with a  dog who values the dummy very highly and wants to keep it (see playing keep away)

Let’s look at some different methods

There are a number of different traditional ways of dealing with spitting out.

Here are a few

A good and simple place to start is backing off.   As the dog comes in and spits, you can simply back away from him in the hopes that he will pick up again and follow you.

If the dog wants the dummy enough, he’ll bring it with him as he comes after you.

With luck and persistence, he’ll eventually hang on to it long enough for you to take it before it hits the deck, and to reward him profusely afterwards.

Some dogs will not pick up a dummy once they have retrieved it and it is lying still on the ground, but will grab it again if it moves.

So, for some dogs, when the trainer gives the dummy a little ‘kick’ after the dog has dropped it will re-enthuse the dog sufficiently for him to grab the dummy again.  The trainer may then use the ‘backing away’ technique to see if he can get the dummy from the dog before he spits.

Apart from the fact that I have seen several dogs accidentally kicked in the mouth like this, as the dog tries to get the dummy before the trainer’s foot connects to it, the method is not reliable.

Not getting to the root of the problem

Like most of these fixes or  ‘patches’, sometimes they work and sometimes they don’t.  They also encourage the handler to grab for or snatch at the dummy because he hasn’t really got to the root of the problem and is still worried that the dog will spit the dummy out again at any moment.

For this reason, many traditional trainers prefer to teach the persistently spitting dog to sit and hold the dummy in his mouth, in a more formal kind of way.

There are various ways of doing this, but essentially during the traditional taught hold, the trainer places the dummy inside the dogs mouth and encourages him to keep it there for a few seconds.  All the while stroking and praising the dog.

This can be done indoors, in an armchair during the evenings, or outside as part of a more formal training session.

Either way, it can work very well.  But not for all dogs.

The biggest obstacle to the taught hold is that some dogs will not willingly open their mouths and take the dummy that is offered to them.

This is very common and the traditional trainer’s response at this point is usually to physically open the dog’s mouth and place the dummy inside.  Therein lies a problem.

At this point, the process stops being fun for the dog.

This dog is not desperate for the dummy like the keep away dog, and here we are associating the dummy with an unpleasant feeling.

You can see where this can easily lead.  To a dog that loses interest in retrieving.

Don’t get me wrong, the taught hold can work well, and in the hands of an experienced traditional trainer, may solve a spitting problem effectively.

In inexperienced hands it can quickly become a forced hold, this is not fun for the dog and can result in the dog refusing to retrieve altogether.

So, what is the alternative?

The alternative and most consistently reliable method of curing spitting is to teach a trained hold using positive reinforcement and edible rewards.  In other words, the clicker retrieve.

If you hate clickers, you can replace the click with a word.  But the principle is the same

Food does not cause spitting unless used without a marker. Badly timed reinforcement  of any kind, causes spitting.

Because the dog cannot eat with a dummy in his mouth, when we use food to teach the hold, it is essential to use an event marker so that the dog knows he is being rewarded for the hold, and not for the spit.

What is this ‘marker’?

This is a simple matter of saying a word like YES (or better still using a clicker) whilst the dog is holding, and following that word with a treat.

The fact that he spits the dummy to get the treat doesn’t matter, it is the hold that is being reinforced by the food and the marker is what enables this to happen.

Don’t attempt to teach this haphazardly, you need to follow a structured process from start to finish, and depending on how much the dog has been put off touching the dummy, and on how much experience you have with event markers,  it could take as long as 2-6 weeks to complete.

Pick that dummy up!

The big advantage of the clicker trained hold, is that it also teaches the dog to pick up the retrieve item from the ground. So if at any time he drops the retrieve accidentally, he can simply be asked to pick it up again.

The clicker retrieve is the most reliable method of curing spitting and dropping available to dog trainers of any kind, and you can find detailed instructions for the process here.  The Clicker Retrieve